A BETTER CLASS OF BUSKER

What happens when Joshua Bell, one of the world’s finest violinists, sets up shop in a Washington metro station? Er, not a lot: 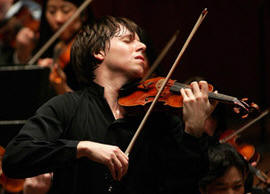 A woman threw in a buck and scooted off. It was not until six minutes into the performance that someone actually stood against a wall, and listened.

You can watch some of the responses on video embedded in a thought-provoking article about the pace of daily life and how we respond to beauty:

Bell is laughing. It’s at himself.

“At a music hall, I’ll get upset if someone coughs or if someone’s cell phone goes off. But here, my expectations quickly diminished. I started to appreciate any acknowledgment, even a slight glance up. I was oddly grateful when someone threw in a dollar instead of change.” This is from a man whose talents can command $1,000 a minute.

Leonard Slatkin, the conductor, had made his own prediction about what would happen. He was way off the mark:

Some people, in fact, didn’t even hear a note:

…Myint works for the General Services Administration. He got to the top of the escalator, turned right and headed out a door to the street. A few hours later, he had no memory that there had been a musician anywhere in sight.

“Where was he, in relation to me?”

“About four feet away.”

There’s nothing wrong with Myint’s hearing. He had buds in his ear. He was listening to his iPod.

Would I have stopped to listen? I’m not sure. If it had been outside, then yes, I would definitely have paused. But in the concourse itself I might easily have been put off by all the background noise. Violins and trains aren’t a perfect match, after all.